Yeah, I like Melissa Brodsky so much I signed up for three days touring with Dark Dawn.  Get over it.  How can you not love her with a cover like this? 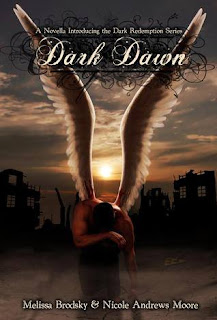 AND it's about angels.  I love angels.  Especially falling angels.

In the beginning God made the heavens and the earth, and everything in between. The In-between was unplanned, unexpected, and unwelcome. Every action causes a reaction and when mankind was born, so were the Fae. Suddenly it was up to Heaven to save Earth. God created Angels to right his wrong, to save human kind. A deal was made, an agreement of sorts. The Angels would protect humanity from Fae domination and destruction, and in return they would have inhuman strength and immortality. Thus a time of angels swooping in to save humans from free will, bad decisions, and big mistakes began. They protected humans from the Fae who intentionally enslaved them, leaving shells of humans, or worse, leaving nothing at all.
Even God doesn’t always learn from mistakes. Angels were given freedom of choice. Some Angels chose wrong. When some of them spread their wings, they went too far, and just as Icharus was punished for getting too close to the sun, they were punished for getting too close to mankind.
So they fell. Falling was the easy part.


The really cool thing about this book is that the authors wrote two versions, an adult and a YA version.  That's something that Indie Authors are breaking the mold on.  Since we market and promote our own stuff, we don't have to pigeon-hole anything into a cute little cubby where someone tells us it will sell.  We can do whatever the heck we want to to sell books.  And some of us are just desperate enough to try whatever it takes.  I'm going to publish two versions of my Christmas novella: a naughty and a nice(r) version 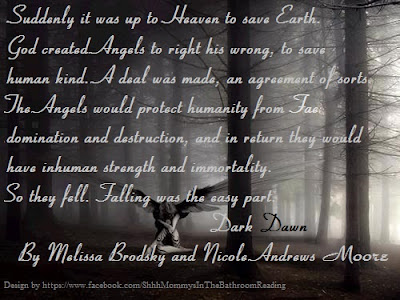