Thanks for sharing in the release of my first full-length novel! I hope you enjoy reading about Kena and Luc as much as I enjoyed writing them. There's plenty of action, adventure, romance, and Vodou for everyone!

I did a little Q&A about the book:

Q) How did you dream up the dynamics of your characters? Originally the story was going to be completely different when I wrote the first 5000 words or so of the book. But after I came back from the 2014 Romantic Times convention in New Orleans, I was inspired to write something with a Vodou/NOLA flair. So the book took a twist and became so much more than I ever imagined. I wanted a strong heroine and an alpha male. But Luc ended up being more of an Alpha/Beta blend. He's not really one or the other. He's quite complex. Kena ended up being a witty heroine who took things into her own hands.

Q) Do you have any habits that get you in the writing frame of mind? Music is my biggest influence. I listened to mainly instrumental gaming soundtracks while writing. But one of my Critique Partners burned me a CD of music she thought would be perfect for this book, and it was filled with great songs by The Black Keys, Rolling Stones, Zepplin, Jack White and Muse. It ended up really making scenes come alive for me.

Q) How much real life do you put into or influences your books? In this book I tried to make the characters reflect their Vodou based deities. I did take some artistic liberties and spun a few things, but I did a lot of research to make sure a lot of the intricacies of their actual descriptions and quirks made it into the story.

Vodou stole her life. A gay ghost stole her boots. And the man who stole her heart stole her memories. Kena plans to get it all back.
Ex-cop Kena's life is filled with regret, beer, and Cheetos. That is, until her ghostly roomie sends her dumpster diving, leading her to a sexy stranger named Luc and a fate she'd rather not remember. As Kena's memories resurface, so do her feelings for Luc, the man she's secretly been in love with for the last thousand years. And he needs her for more than a stroll down memory lane.
Vodou spirits, known as Loa, have been trapped in human form, and are trying to make their way back to the spirit world. But Luc's brother is possessed by a vengeance demon conjured at the hands of NOLA's crime syndicate kingpin. Saving him means damning herself to a spirit prison in a loveless, arranged union with the very man she's supposed to rescue. But not helping Luc's brother sentences him to death, leaving New Orleans in the hands of black magick, and losing Luc forever.

After stripping out of the wet clothes, I wrapped the towel around myself and wandered out to his room. On the bed lay a white long-sleeve button-down shirt. With a hard swallow, I dropped the towel and picked up the shirt, pulling it to my face. I took a long, hard sniff. Laundry detergent. Of course. Did I think it would smell like him?

Like he'd give you a dirty shirt to wear, Kena.

Thankful he didn't witness me in idiot-mode, I slid myself into the shirt and was caught mid-button when he knocked at the door.

“Are you decent?” He pushed the door open a crack.

“I'm clothed, if that's what you mean. Decent is debatable at the moment.” Purposely leaving the top three buttons undone, I worked my way to the bottom button as he walked in.

He halted mid-stride and looked at me. His chest rose and fell in quick spurts, training his eyes over me from head to toe. Veins traversed the length of his arm as he clenched his fists at his sides. “I don't wear underwear, so I apologize I have no bottoms. It's all I had that was long enough to cover you.” His position relaxed as he leaned against the mahogany armoire.

“Anything's better than cold, sopping-wet clothes.” I ran a finger through my hair, now slowly drying into loose stringy curls.

“So, are you going to tell me what happened tonight?” Folding his arms across his broad chest, bulging muscles stretched the navy-blue fabric barely covering his biceps.

I shook my head. “Not until I get some honesty from you, big guy.”

With a tilt of his head, he donned a sly grin. “You haven't asked the right questions.”

“Is this a game for you? Do you enjoy messing with people's lives? Do you get off on some fucked-up high being in total control?” My fingernails burrowed into the palm of my hand. Everything in me wanted to slap the shit out of him and then ride him like a cowboy.

He pushed off the dresser and walked over to me, lowering his head coming to a stop inches from my face. “You're the one in control and yet you refuse to acknowledge it.
You refuse to let your mind accept it. Stop playing and start being.”

“What do you want from me?” I yelled, a little louder than intended.

“I want you to be you. I want you to”—he stopped and dropped his gaze to my lips, and then slowly made his way back up to my eyes—“come back.”

“Kiss me.” The words rushed from my lips without another thought. My heart hammered so hard in my chest I thought it would shatter my rib cage.

His breathing quickened. A low growl rumbled in his throat. “Don't do this to me, Kena.”

“Don't do what? You're the one doing things to me.” I slammed my hands against his chest and he sailed across the room, his back hitting the dresser behind him. “Shit! I'm sorry.” I reached out for him with a trembling hand.

He shook his head and straightened himself up. In a blur of movement, he shot across the room and grabbed onto either side of my shirt, yanking me up to his face. “You want me to kiss you?”

“Yes,” I said in more of whooshing sound than a word.

He pressed his lips against my neck and his fingers curled into the fabric of the shirt, pulling me onto my tiptoes. “You don't even know who I am.”

“I don't care.” Words no longer made sense to me, only his touch spoke a language I could understand.

He laughed as he pushed me against the wall. Gripping the back of my head with the entire palm of his hand, he splayed the other across my cheek, his thumb resting against my jawline. Tilting my head back, he hovered his lips over mine. “You will.”

His lips crushed against my mouth.

With a sweep of his tongue, he devoured me into a kiss the likes of which I've never experienced before in my life. He punished my mouth with his tongue, sliding it over mine in a delicious dance of ecstasy and aggression. His hold on me was not that of violence, but of passion. The way his fingertips eased against my face, yet held me there as if he was scared to let go, revealed a vulnerability. He may be a man of few words who knew how to play the vague card, but his body and actions gave him away.

I arched into him, and he pinned me back against the wall with his hip. Clawing at his shirt, I ripped it out of his jeans and slid my fingers over his heated skin. A surge of energy rushed my fingertips as they glided along his body, electrifying me.

“Fuck, Kena,” he hissed, pulling back from the kiss.

In a movement so fast it blurred everything around me, he shot out the door, slamming it behind him. He left me gasping, clinging to the wall behind me just to remain standing.
My legs wobbled like Jell-O as I stumbled to the bed and collapsed. He sucked all the air from my body and replaced it with an ache, a driving need for more of him.

What the hell was he?

My Review:
OMG...  I have been hearing about this book for months and it still took me to unexpected places which is exactly what I want my reading experiences to do for me.  My heart was in my throat throughout most of the book because I was so invested in the well-drawn characters.  The setting was exquisite and made me long for my next visit to New Orleans (which, incidentally is only a couple of weeks away).  There isn't anything I can say about this book besides, WOW. I truly believe Wren is up there in my top ten favs, especially as she's a new author and is quickly sweeping me off my feet.

Wren Michaels hails from the frozen tundra of Wisconsin where beer and cheese are their own food groups. But a cowboy swept her off her feet and carried her away below the Mason-Dixon line, where she promptly lost all tolerance for snow and cold. They decided they'd make beautiful babies together and they got it right on the first try. Now Wren lives happily ever after in the real world and in the worlds of her making, where she creates book boyfriends for the masses to crave.
Facebook | Twitter | Amazon Page | Website | Tsu |
Posted by Anne Conley at 10:45 AM No comments:

Read more »
Posted by Anne Conley at 7:06 AM No comments: 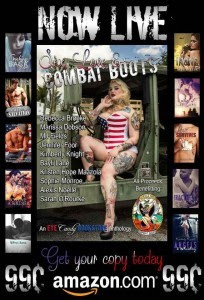 Heels for Combat Boots
HFCB was founded and created by Kati Sorensen AKA 'Riskay Business' and was officially established on February 28, 2014. HFCB sets out to assist our Servicemen and women with PTSD/TBI (Post Traumatic Stress Disorder and Traumatic Brain Injury). We assist with helping these individuals adjust back into the world of civilian life, connect them with the correct outreach and treatment programs, help with their day to day struggles and issues; such as assisting them with paying their bills, obtain groceries, etc. We help to get them back involved with the things they enjoy, introduce them to new experiences, and connect them with hunting and fishing trips. Also getting involved with Vet events, visiting the VA's, and sending out care packages. Check out our event page to see all we have up our sleeve to raise funds!
HFCB Website: www.heelsforcombatboots.wix.com/hfcb
GoFundMe: www.gofundme.com/hfcb2015year
Store: www.cafepress.com/hfcb
Instagram:www.instagram.com/heelsforcombatboots
Facebook: www.facebook.com/heelsforcombatboots

Posted by Anne Conley at 6:36 AM No comments: