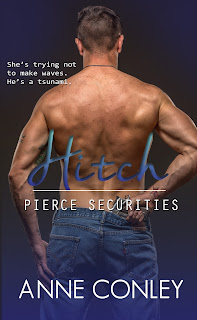 Hitch is here!  Book eight in the Pierce Securities series.

Amber Banks has her sights set on a fresh start at the Austin Police Department after a disastrous stint in her hometown. All she wants is to be a good cop and get the validation that goes with it. If she can get away from Dex, everything would be so much simpler. But her mama always told her nothing good ever came easy.
Dex Hollerman has just retired from the force and is trying to fit in with the guys he knows so well at Pierce Securities, only now, he’s on their side for a change. With Simon’s weird edicts hanging over his head, and his inability to get the woman who was made for cop porn fantasies out of his head, it’s a struggle.
There’s a mad gunman blowing up exploding targets in downtown Austin putting a hitch in their plans, so can they get past this crazy attraction to work together?
Or will it be their downfall?

Excerpt:  He tiptoed to the carport, ignoring the fact he was in boxers and nothing else. Nobody was looking his way. He could see Mrs. Noble peering out her window, trying to crane her neck sideways.
Dex knew he’d heard someone in his carport—knocking over a trashcan—and it probably had everything to do with the explosion, but there wasn’t anyone there now. With a grunt, he turned to go back inside and put on some pants before going across the street to help over there.
His door was locked.
Looking down at himself, Dex rolled his eyes.
Fan-fucking-tastic.
He had a gun and was out in his underwear at the scene of an explosion, probably similar to the explosions that had been rocking downtown Austin. Yeah. That wasn’t suspicious at all.
Sirens screamed in the distance. Dex didn’t have bushes around his house because that would be the perfect place for burglars and home invaders to hide. Of course, now he needed a place to hide. He looked over at his neighbor’s yard.
Somebody else’s bushes would have to do.
Twenty minutes later, he was still in the Lockhart’s bushes when Mr. Lockhart left for work. He ducked down further, hoping the enormous, red-tipped Photinia shrubs would hide him sufficiently.
When Mr. Lockhart left, another car pulled up—another police car. There were already three, plus the arson investigator’s truck. But this car was special. Dex knew it before she even got out of it. The number stenciled on the side of it meant it was her car.
Amber’s car. 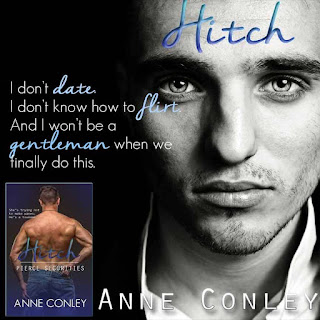 She got out and stood there, looking over the roof of the car. Bracing her hand on her forehead against the sun, she did a slow perusal of the neighborhood. Dex’s thighs were burning from squatting in the bushes for so long, but he managed to shift so he was on his knees and could see her better. But something about his movements had her zeroing in on him.
“Hey!” She started walking over, hand on her piece. “Stand up! Hands in the air!” Her voice was authoritative, with an edge of something. Not fear. Nope. But something darker than authority. It was a turn-on, but Dex wouldn’t let his brain go there, not while she couldn’t see him, and he was nothing short of a threat to her.
He knew he’d been busted, and there wasn’t really any way out of this. Maybe she would show some pity on him and let him get some pants.
Holding his hands up in the air, he stood slowly, his gun dangling from one finger by the trigger guard.
“Oh, for the love of God,” she muttered when he came into view. He could only imagine what he looked like. “Are you even wearing clothes?” Standing in the bushes, she couldn’t see he was not in fact wearing clothes. She gestured for him to throw the gun, and he complied, tossing it at her feet. Lips pressed into a thin line, she holstered her weapon, levelling him with a glare. She was pissed as hell. Pissed as she was, though, Amber stared at his chest, mouth agape, eyes wide. A strange thrill went through him, a definite sense of pride. Dex would not have gotten this reaction from her with his old body.
“My Haines.” Dex tried a grin and managed a small one. Her anger was helping with his discomfort, but only, like, an iota. Surely, he’d laugh at this someday. Right now, all he could think about was the fact he would for sure be the talk of the task force tomorrow morning.
“Alright. Turn around and put your hands on your head.” She reached for the cuffs at her back, and Dex’s cock inappropriately jumped and strained.
“Why are you cuffing me?” Even though he was doing exactly what she said.
“You are at the scene of a crime in very suspicious circumstances. You turned up in my investigation yesterday, and now this. And if nothing else, you are in violation of a code or two, Austin or not.” 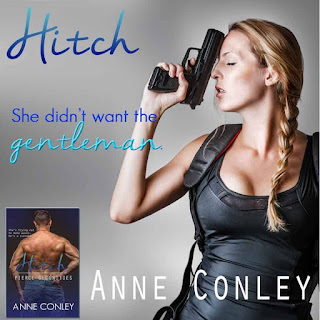 “Keep it weird,” he muttered as she cuffed him, none too gently. Still, the erection tented the front of his boxer briefs. “Let me take you to dinner sometime.” It was worth a shot. She had relented and given him her name.
But the scoff she let out told him he was pushing his luck. Still she had him in cuffs, and his mind was going places. Oh, the places …
She led him across the street and when they got to her car, he turned on her. Her eyes widened when she got a look at his bulge.
“I live right there. Someone was in my carport and I was checking it out when the explosion happened. I locked myself out and have been outside ever since.” His explanation did nothing.
“Great. Get in the car.”
“You’re detaining me?”
“I’m securing my crime scene. Get the fuck in the car.”
When she opened the door, he allowed her to tuck his head in as he folded his bulky frame into the vehicle. His erection needed an adjustment, but he didn’t think she would go for it. Instead, he just hoped it would wilt on its own.
But she’d cuffed him.
He shouldn’t be so aroused by that, but he couldn’t help himself.
Cuffs.

Anne has written her entire life and has the boxes of angst-filled journals and poetry to prove it. She’s been writing for public consumption for the past several years. Currently, she has four romance series. In Stories of Serendipity, she explores real people living real lives in small town Texas in a contemporary romance setting. In The Four Winds, she chronicles God’s four closest archangels, Uriel, Gabriel, Raphael, and Michael, falling in love and becoming human. In Pierce Securities, she gives us Ryan, Evan, Miriam, Zack, Quinten, and Simon. Her newest series, Book B!tches, is all about a group of women in Mystic, Texas who get into all sorts of shenanigans. She lives in rural East Texas with her husband and children in her own private oasis, where she prides herself in her complete lack of social skills, choosing instead to live with the people inside her head.