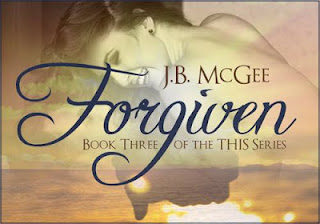 Today, I'm featuring JB McGee on her spotlight blog tour of her new book, Forgiven.  I'm participating in more blog tours because Summer's coming, and I can't imagine that my kids are going to give me the peace necessary to come up with my own blog posts.  But I'm going to try to get a few in here and there... 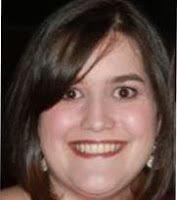 J.B. McGee was born and raised in Aiken, South Carolina. After graduating from South Aiken High School, she toured Europe as a member of the 1999 International Bands of America Tour, playing the clarinet. While attending Converse College, an all-girls school in Spartanburg, South Carolina, she visited Charleston often. It quickly became one of her favorite vacation spots. She met her husband, Chad, during Christmas break her freshman year, and they married in 2001 and she moved back to her home town.
In 2005, the couple welcomed their first son, Noah. J.B. finished her Bachelor of Arts degree in Early Childhood Education at the University of South Carolina-Aiken in 2006. During her time studying children's literature, a professor had encouraged her to become a writer.In 2007, she welcomed their second child, Jonah, and she became a stay at home mom/entrepreneur. In 2009, the found out their two children and J.B. have Mitochondrial Disease. In 2011, a diagnosis also was given to Chad. Please take a moment and learn more about Mitochondrial Disease. Awareness is key to this disease that has no cure or treatments.J.B. McGee and her family now reside in Buford, Georgia, to be closer to their children's medical team. After a passion for reading had been re-ignited, J.B. decided to finally give writing a shot. Broken (This Series), is her first book and first series. 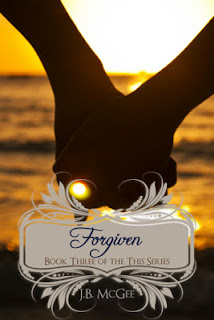 I'm currently reading this book, and haven't gotten to this part yet, but I have a feeling I'll be reading it later this morning, during my daughter's awards ceremony at school (those things are so long).

I walk to our closet and strip out of my clothes to where I’m down to just my light pink lace bra and matching boy short panties.  When I go into the bathroom to take my contacts out and wash my face, he follows me and acts like he’s busy.  He’s pissed me off even more than I already was.  I turn on my heel to leave the bathroom, and he grabs my elbow right as I think I am out of his reach.  He pulls me back and crushes my body against the wall, pinning my arms above my head.  He has his other hand on the wall beside my face.  His body is so close to mine that I can feel his heat radiating onto my exposed skin.  He glares at me, still silent.  I lift my chin and narrow my eyes at him.  My desire has pooled between my legs, and I am literally bound and determined to not say the first word.
He shakes his head to the side and rolls his eyes.  “You’re so damned set on ignoring me tonight.”
“Hmph.” is all I give him the satisfaction of hearing.
“Why couldn’t you just drink the damn water?”
“It wasn’t about the water,” I spat as I break our eye contact for the first time.  He’s so sexy like this that I can’t even think straight.
He uses the hand that was on the wall to move my chin back up to where I have to look at him.  “Oh really?”  He licks his lips.  “If not the water, then what?”
“You were being rude and bossy,” I pout.
He chuckles.  “I noticed you pouted there, too.  I must say, you’re sexy as hell when you pout fully dressed, but you just took sexy to a whole new level.”
I inhale and exhale sharply, trying to get a grip on the raging heat that is consuming my body.  “It was hard enough without you being a dick.”  I look away again.
“Gabby,” he whispers as he moves a piece of hair behind my ear.  “Do you know how hard it was for me to watch you do that to yourself?  To subject yourself to that?”
I shake my head and gulp.  “No,” I mutter.
“You know I crave control, and I don’t know that I have ever felt so out of control in my life.  You have no idea how hard it was for me to sit there and watch that unfold.  To watch your heart being sliced open and served on a damn platter right in front of me.” He looks up to the ceiling and I can tell he’s trying to contain his anger, or maybe it’s frustration.  I don’t know what I’m seeing in front of me right now.  “I had to try to do something to help you.  And you shut me out, Gabby Girl.”  When he turns his head to look back at me his blue eyes are intense.  They sear me.  “You shut me out, and you shut me down.”
“I’m sorry,” I whisper as I bite my lip to keep from crying.

And here's some fun stuff the Ms McGee has put together for you guys.