I love Vanessa.  She's one of my favorite people in the world.  That's why I jumped at the chance to participate in her cover reveal today.

But first, let me say, Vanessa's one of my critique group members, and I've read part of this book.  It's amazing.  It's the best zombie book out there, hands down.  She hits on so many emotional levels that it's more than a zombie book, more than a romance.  It's so good.

It's funny, in my own exuberance, and disorganized way, I agreed to do the cover reveal on the same day that my own cover reveal for Hot Mess is taking place.  So while other blogs out there are revealing my cover, I'm revealing Vanessa's.  It works for me.  I'll reveal mine later in the week, and hopefully you will have already seen it, because the other bloggers have a bigger audience.  And I still get to support my friend.  Cuz that's how I roll...

Carly Rios was supposed to go to college, forget about her first love, and live a normal life. That was the plan until the whole world went to hell and the dead started becoming…not so dead.

Forced to live in the same quarantine as her abusive stepfather, Carly is hanging on to life by a thread, as she dreams of a normal world outside of the community. But when tragedy strikes home, Carly has no choice but to try and escape with her brother Michael. On the night that Carly plans to leave the community, chaos erupts, causing her plans to backfire, unleashing the undead inside.

Now, Carly must reach out to Joshua Tremell, a man from her past, and the one who left her heart in pieces. Trusting Joshua is one of the hardest things she’ll ever have to do, but without his help it’s only a matter of time until Carly loses her brother Michael to the undead.

Two months after returning from fighting over seas and coming home to face a world overtaken by the undead, Joshua Tremell is accustomed to death and losing the ones he loves. But when fate brings him back to his childhood sweetheart Carly Rios, Joshua realizes there are some things still worth fighting for.

Carly is the last person Joshua thought he'd ever see again, let alone in the same quarantine. Facing off shufflers isn’t easy, but the thought of losing the only girl he’s ever loved again, is even worse.

With a second chance at redemption, Joshua would give anything to save Carly and help her get her little brother back, but Joshua has more secrets than he can tell, and his past mistakes are bound to collide with the future he's dying to earn.

For Carly and Joshua, crossing the wasteland is just the beginning…

*Mature Content Warning: 17+ for language, intense violence against the undead and adult situations.


“The only good human being is a dead one.”
-George Orwell

I knew his gun was in the top drawer. I’ve watched him place it there. Tonight is the last night I’ll ever let him touch me. I watch his breath rise and fall rhythmically as he sleeps. From where I stand he doesn’t look so threatening, anymore at least, not how he looked earlier that night. My cheek still burns when I touch it. A bruise is starting to form underneath my swollen skin. I step into the darkened bedroom cautious, as the wooden floors squeak beneath me. He can wake at any moment. My hands tremble as I make my way toward his nightstand. It has to be here unless…as I pull the top drawer open, I’m relieved to see the gun is still there. It sits shining in the moonlight that cascades down through the cracks of the boarded-up bedroom window.

I pull the gun from the drawer but pause midway. My stepfather’s snoring has stopped. Fear paralyzes me, and I freeze, still. Is he awake? Is he watching me? I hold my breath, my eyes squeezed closed, waiting. Several seconds pass, and then like clockwork, I can hear the sound of his snoring again. I look down at the handgun and then back at my sleeping stepfather. I shiver in disgust at the memory of his hands on me; no amount of soap could ever wash away how dirty he makes me feel. My stomach rolls at the memory of the way he whispered how I would always be his.

Not anymore. I step into the hallway shutting the bedroom door quietly behind me. A small sense of relief washes over me. I did it. Before I know it I’m all the way down the hallway of our one story home. Tonight, is our last night behind the safety of the community fences. It frightens me to think about what’s waiting for us outside, but staying isn’t an option anymore. I stare down at the gun in my hands. I’ve never held one until tonight. The sound of a soft voice catches my attention.

It echoes down the hall. Michael must be awake. I slip the gun behind me. There’s no reason for him to see it; it will only scare and confuse him. He’s been pretty quiet these past few hours. He keeps asking for our mother. I don’t have the heart to tell him that she’s gone. The only thing left is a shell of the woman she used to be. It’s been seven days since she became infected.

I made her a promise when it happened. I promised her that no matter what, I wouldn’t let her become one. I know what I have to do, and despite what my stepfather Tom tells me, I know my mother is sick and she isn’t getting better.

Our home is made up of three rooms. Tom sleeps in the master bedroom. I share a bedroom with Michael, and my mother is in the guest room. We live in a town sectioned off from the outside world. It’s better than what most survivors have, but it’s temporary. Our emergency supplies were never meant to last past six months. We’re going on our seventh month and our food and water is nearly gone.

Tom keeps my mother isolated from everyone here. A cold draft hits me as I enter her bedroom. I can hear her heavy breathing, her lungs crackling as she inhales. Small white clouds of air escape her mouth. It’s freezing in here. I switch on the emergency lantern near her nightstand. The fluorescent light reminds me of a hospital room, as it chases away the darkness. I gasp at the sight of her; she’s gotten worse. Her eyes are blood shot and her pupils are dilated. I touch her skin to check for a fever, but she feels ice cold. I grab her hand and place it in mine. Her skin is pale yellow and she’s starting to bloat like the others. She has a day at most, maybe less. The bloated skin on her finger engulfs her wedding band. It’s the one my father gave her before he died.

It wasn’t the infection that took him away from us. He was in a motorcycle accident when I was fifteen. He suffered an injury to the head and went into a coma.

I twist the ring off her finger.

My mother sold our old house to pay for his medical bills. She didn’t have the heart to pull the plug. Not too long after his accident, they flew him to a fancy medical hospital in Colorado. I thought he died. She told Michael and me that he did, but a few days ago I found some old hospital bills stashed in a shoebox. She lied. For the past three years she’s been paying to keep him alive. At least, she was until the outbreak happened.

She stares at me blankly, making it clear she no longer recognizes her own daughter’s face. I’m sure in her eyes I’m only a stranger, someone she’s never seen before. I reach down for the wash pan at the foot of her bed, and I cringe at the sight of the brown, murky water inside it. Tom refuses to clean her with any of our clean water and instead subjects her to the dirty-brown, rusted water from the faucets. As far I know it isn’t hurting her but she deserves more than that. Tom wants to keep her around because of the food rations. Each person in the community is given a certain portion of food, no more, no less. He takes hers for himself. I hate seeing her like this.

A moan escapes her lips. I pull the gun out from behind me fearful that she’s turning. I have to do what she couldn’t for my dad. I have to let her go. I have to.

I raise the gun toward the front of her face. My hands tremble, the gun is heavier than I expected. Through her confused and sickened state, she looks up at me as if she has a moment of clarity. I close my eyes and turn my face. I picture her as she was before the outbreak. In my mind she stands radiant and beautiful as she smiles down at me. I can almost hear her saying everything will be all right. They say goodbye is the hardest thing you’ll ever have to say. So I don’t say it. I breathe in and pull the trigger. 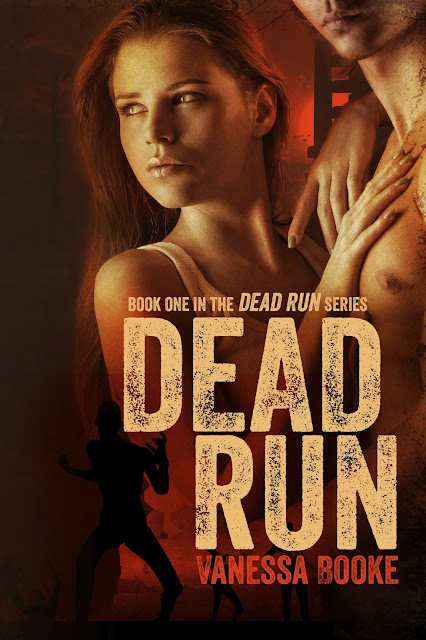 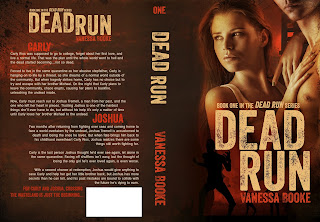 I really need to get the information for her cover designer.  It's beautiful.  Absolutely gorgeous.  Anyway, contact Vanessa Booke at the links below...

My name is Vanessa Booke and I live with my husband Ryan and our three dachshunds Zer0, Zoey, and Zelda just outside of Los Angeles, California. I love poetry and all things Jane Austen. I've been writing since Jr. High, it started with poetry and eventually in high school I began writing Fiction. My favorite genre to write in would have to be young adult, or new adult. I currently work as a communications coordinator for a charity, but I've also worked as a journalist. I have my Bachelor’s degree in English Literature from Cal State University San Bernardino. In my free time, I like blogging about books, thrift shopping and taking grand adventures with my partner in crime.