England, 1816
Dr. Peter Fairbanks travels to Derbyshire in hopes of founding his own practice and setting up a life for himself. Before he can settle in, he is invited to a house-party at the sprawling estate of Ravenwood Fields by its master Baron Ravenwood, Lord William Pierce. Never suspecting the secret which haunts its grounds, he consents to stay indefinitely as the family doctor. But between the strange behavior of his patients and the sensational scandal which simmers just under the surface of the posh family's carefully crafted exterior, he begins to question his choice.

Arabella Pierce has not felt right since the carriage accident. She is plagued by strange dreams and visions. Her head never seems to stop hurting. When she is introduced to Dr. Fairbanks, she feels no attraction yet something inside urges her to become better acquainted with the handsome physician. Tormented by inner passions, resistance brings her increasingly closer to a state of desperation and danger...

I personally can't wait to read this one.  I LOVE historical anythings, and have been looking forward to the release of Resistance for a few weeks, at least.  Unfortunately, I just got the book yesterday, and haven't read it yet, but I will...Oh I will.

R.A. Mizer was born R.A. Hackney in Pune, India in 1986. She was the first child of a Caucasian father and an Indian mother whom her father met during his college years.  Her parents brought her to the United States when she was six-weeks-old. They raised her in North Carolina along with two sisters: Sarah and Rebekah.  She has been married to her high-school sweetheart, James Mizer since 2007 and hopes to start a family soon.

From the moment she could pick up a pen, she has had a love affair with writing and creating. She was incredibly blessed to come from a family full of creative people and interesting characters. She writes stories of all lengths but the novel format is her favorite, delighting most in development of characters and their respective relationships. She enjoys reading classic, Gothic and some contemporary works. 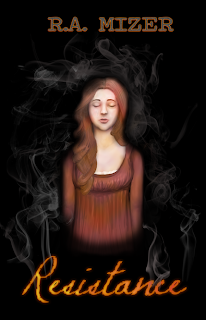 When the torrent of guests had subsided to a trickle of late-comers, the receiving line disbursed.  Cocktails and sweets were served in the card room and supper room.  Fresh, cold lemonade, hot tea and coffee were available as well.  Peter checked his watch again.  He’d been waiting for Arabella for an hour.  Even when the Baron and his Baroness had been ushered into the ballroom and the music picked up, still the young Doctor watched the empty staircase with watch in hand.
Someone did appear, but it was not Arabella.  In a crimson gown with white trim and gold thread embellishment, an astoundingly exquisite girl appeared on the top landing from seemingly nowhere.  Her sumptuous dark brown hair was worn in ringlets that fell about her shoulders.  Elbow-length white gloves adorned her slender arms, leaving a little of her lightly tanned skin visible.  Little jewels dripped from her ears but her neck remained bare.  Her full red lips were spread in a smile when she saw him, though he was sure they had never met.  He was exceedingly sorry they had never met.
With complete disregard for propriety, he watched her, mesmerized by the curves that could not help but be seen, even from under the flowing chiffon gown.  She met him at the lower landing.  He hadn’t stopped looking at her the entire time and, he realized, she had not stopped smiling at him.  He dropped his watch and it swung on its silver chain.
“Bonsoir.  Have I missed the receiving line?” she said, revealing her deep, thickly accented voice.  He foolishly said nothing, standing like a mute with his mouth caught open.  “Are you alright?”  Her smile teased him.
“They went away,” he said stupidly, childishly pointing at the ballroom’s glowing entrance.
“Did they?”  She giggled.
“I am afraid I have missed them then and I have no escort,” she said, feigning concern.  For a moment they were both quiet.  What little sense he had left inclined him towards offering to escort her in but he was rendered nervous.  “Shall we strike a bargain?” she said, taking control of the awkward situation, her enchanting smile not departing her angelic heart-shaped face.  “If you tell me your name and if you are a gentleman, I will let you escort me in to the fete.  What do you think?”
“Peter,” he said, sure he hadn’t taken a breath in the past two minutes.
“Just Peter?” she asked, chuckling.
“No I’m... Peter Fairbanks... Doctor,” he said, witlessly fragmenting his unimpressive title.  He extended his stiff arm and hand, as if greeting another gentleman.  She surveyed his hand coyly and then placed her gloved hand in his.  His hand tingled as the slim, warm fingers lay there.  Inwardly, he cursed himself for acting like such a fool in front of such a gorgeous woman.  He lifted her hand to his lips and kissed them.  He caught a hint of her perfume, definitely Parisian and devastatingly feminine.
She hooked her arm into his.  “You are very funny, Doctor.  I already like you more than I can say.”