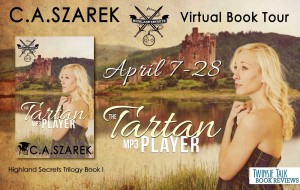 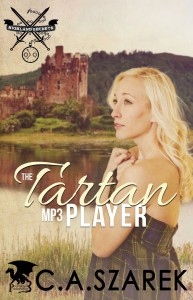 Book One in the time travel, fantasy romance series, Highland Secrets!
She never believed in magic…
Claire McGowan, Scotophile and historical romance novel addict, finally saves up enough for her dream vacation to Scotland.
She never imagines she’ll get sucked back to the seventeenth century while running on the beach—that’s what she gets for exercising when she should be relaxing.
He knows with a harsh certainty magic exists...
The Fae have taken his brother—Laird of his clan. Duncan MacLeod finds a bonnie naked and confused lass. He’s convinced Claire arrived in 1672 through the Faery Stones—a magical portal he’s been scouring the lands for over the past six months.
At last, he has someone who’s been through the Faery Stones and can help him find them—and get his brother back.
Duncan promises to help Claire get home, even though his desire to have her wars with his vow.
Torn between familiarity of the present and what she wants in the past, can Claire help Duncan find his brother and get back to the future? Will she even want to?
My Review:
Going into this, I was a little leery about the similarities between Tartan, and Outlander (Scottish, Timetravel, Stones, Claire).  Jamie was by very first book boyfriend, and I don't read a lot of time travel romances for the reason I'm just afraid they won't measure up, but by Chapter 4, I was irrevocably hooked.
By the time the Fey and the pirates were introduced and interacting with the plot, it was so different I realized I shouldn't have even worried about it.  The pirates are deliciously bad, and the fairies are their realm are perfect.
I did have some issues with the book.  Claire's motivations for wanting to return weren't made clear until near the end and the mechanics of the resolution was also confusing, like the ending was rushed, or not beta-read well.  But all in all, I was left with a sweet taste in my mouth regarding this book. It made me feel good.  And shit.  Duncan was (insert your favorite adjective here: drool-worthy, swoon-worthy, panty-melting, HAWT,awesome-sauce, amazeballs).

About The Author:
C.A. is originally from Ohio, but got to Texas as soon as she could. She is married and has a bachelor's degree in Criminal Justice.
She works with kids when she’s not writing.
She’s always wanted to be a writer and is overjoyed to share her stories with the world.
To learn more, visit C.A. Szarek on her blog, on Twitter, Facebook, Goodreadsand website.
C.A. Szarek is also author of Collision Force, Chance Collision, and Sword's Calland Love's Call.
Buy Links
ARe: https://www.allromanceebooks.com/product-thetartanmp3player-1439166-141.html
Barns and Noble: http://www.barnesandnoble.com/w/the-tartan-mp3-player-ca-szarek/1118893645?ean=9781941151044
Smashwords: https://www.smashwords.com/books/view/411992
KOBO: http://store.kobobooks.com/en-ca/books/the-tartan-mp3-player/C6Kx_UDQ_0qJFy3_HMXXgA?MixID=C6Kx_UDQ_0qJFy3_HMXXgA&PageNumber=1
Amazon: http://www.amazon.com/Tartan-Player-Highland-Secrets-Book-ebook/dp/B00IKCHCT2/ref=la_B00BJY74BY_1_6?s=books&ie=UTF8&qid=1393746276&sr=1-6