Today's awesome with a blog stop for Samantha Holt's Not Another Soldier, a giveaway, an interview, and CA Szarek's latest cover reveal!  Scroll away!  Lots to see today.!

Title: Not Another Solider

I've just buried my husband. I was going to divorce him and now he’s dead.

After five years as a military wife, Sienna is moving on. She’s keen to leave behind the misery of her marriage to Rob but for some reason the past won’t let her go. It doesn't help that her closest friend, Nick, is also a soldier. Unfortunately Sienna is struggling to deny her attraction to the sexy marine, even knowing there can be no future in it. When the injured soldier admits he wants her just as badly, and has always wanted her, the fight to control her feelings becomes harder.

And now she’s learning things about her late husband that surprise even her. When the secrets of Rob’s life come to light, Sienna finds herself involved with some very nasty people and Nick is determined to protect her, no matter what.

As the danger grows to both her heart and her life, Sienna needs to decide if it was the army that was the problem or her late husband. Is Nick worth the heartache of being a military spouse again? And will he be able to protect her from the ring of drug dealers slowly closing in?

Drawing in a breath, I open the door. Hopefully Nick’s all settled and I won’t even have to—

He’s sitting on my bed.

Damn the man. He studies me, slow and languorously, and I flex my fingers, longing to splay my hands across myself. My simple PJs now feel sexy and I’m definitely showing off too much skin.

Nick nods slowly, his eyes saying everything is more than okay. My skin heats and I hope he can’t see the redness that’s no doubt in my cheeks and on my chest.

“Yeah,” he says finally, gaze lingering on my bare legs. “I just wanted to make sure you were okay.”

Though I don’t sound fine. Having your heart going the same rate as a freight train or your blood boiling beneath your skin probably isn’t fine. But that wasn’t what he meant.

“It’s been a crazy day and I am a little shaken but I’m okay, I swear. I just need a little rest and I need to get this place back to normal and then I’ll be great.”

Nick takes a moment to study me once more and stands. “All right. Just checkin’.”

“Oh.” I go to my closet. “Here’s some blankets.” I draw out two old ones that I usually use if the temperature drops and pass them over.

“Thanks.” He takes them from me.

“Do you need something to sleep in?” I bend down and rummage through the bottom drawer. “I might have some old T-shirts.” I find one and come up to standing.

His eyes are wary and he looks tense, slightly like he’s going to explode at any moment.

Baffled, I thrust out the T-shirt. “It’s one of Rob’s. I don’t know why I still have them really. Or would it be weird wearing his stuff?” He doesn’t respond so I hesitate before turning around and chucking the T-shirt back in the drawer. That was a stupid idea. “Sorry, guess it would be.”

With a wry laugh, he nods. “Yeah, I don’t want to be wearing his stuff, but I got to tell you, babe, I’m more worried about your night clothes.”

“If you’re sleeping like that,” he motions with one hand down me, “then it’s going to make me sleeping there,” now he points to the couch, “a real trial. ‘Cause when you bend over in those shorts, all I want to do is take you to bed and peel them from you.”

1.  Describe your writing process.  Do you have certain things that must happen for your creativity to flow?

I’m not sure I have one. It’s just a case of planting my butt on a chair and getting on with it. I do ‘sprints’ with friend or against a time which helps keep me from getting distracted.

Yes, mostly alternative rock though recently I’ve had a few power ballads driving me on LOL I go through stages where I’ll listen to one band obsessively. At the moment, it’s Poets of the Fall and Shinedown.

3.  Not Another Soldier is a pretty big departure from your normal genre of Historical Romance.  What made you decide to write this one?

For a while, I’ve been wanting to use some of my experiences as a military wife in a book, but nothing really came to me. I’ve always been a huge fan of romantic suspense and this inkling of a story echoed in my mind and went from there. I do believe the first chapter was written under the influence of wine!

4.  Have you always been a writer?  If not, what inspired you to start?

I started writing about… two years ago I think. I always enjoyed it in school but never really considered it as a career. It started as something to keep me occupied while my husband was away in Afghanistan and I quickly became addicted. It astonished me (and still astonishes me sometimes) that people actually wanted to read my books.

5.   You are both traditionally published and independently published, right?  Which path did you choose for NAS, and what are some advantages/draw-backs to that?

I went indie for Not Another Soldier for several reasons really. One, a traditional publisher can’t keep up with me! I already have two traditional releases coming out this year but the book industry at the moment is so competitive, that you need to keep up the momentum.. Two, I wanted to control the price and be able to offer it on sale for a while. I didn’t want it on sale at a price I thought was too much. Three, it’s a personal story for me because Sienna is very much like me. I wanted it edited by an editor of my choosing. I’ve worked with several and editors vary dramatically. I’ve been lucky, but you never know if you’re going to get someone who you can work well with.

I am desperate for a pretty little shed at the bottom of the garden or we stayed in a gorgeous cottage in Cornwall during the summer (in the South of England) and it overlooked the harbor and beach. That would have been perfect for writing.

7.  If you could give some advice to someone trying to start a professional writing career, what would it be?

If you genuinely want to do it as a career, then treat it as one. Be businesslike, put in the hours and the work. Don’t be too precious over your work. I see authors behave as though they just invented writing and it’s pretty yucky to witness LOL I write for entertainment purposes at the end of the day and that’s what’s helped me carve a career. Lots of writers get frustrated by big business and publishers treating them as nothing more than a commodity but at the end of the day, that’s what it is. A publisher doesn’t care how personal a story is to you, they just care that it makes them money. Sad but true :)

Thanks for joining us, Samantha.  I really appreciate it!  Before you leave, would you be willing to have a little fun?

Would you rather have…

I have both! But I had the cats first, so cat.

Elvis or the Beatles?

Don’t shoot me… I really don’t like the Beatles so Elvis.

Alone time or go out with friends?

Out with friends. Dancing preferably.

There wasn't a whole lot to not like about this story by Ms. Holt.  As I mentioned in the interview, this is a huge departure from her Historical Romances, but it was done very effectively.  The internal conflict of the main female was real and relatable for me.  Her inner monologue wasn't whiny nor repetitive, and it was all stuff I could relate to as a woman and a wife.  While I have never been a military wife, I have known some and must say, the conflict there was refreshing.  It wasn't what I typically read, in regards to military romances, and it was nice to know there are other issues besides "Oh no!  What if my lover dies?"  Although that was a part of this, it wasn't the main issue, so I was okay with it.

Of course, the hero is totally swoon-worthy, and my fickle self fell in love almost immediately.  I would totally bag him.  :)

Thanks Samantha, for another great read!

Samantha lives in a small village in England with her gorgeous twin girls and husband who is a trained bodyguard and ex-soldier (Yes, seriously!). She traditionally writes historical romances involving chivalrous knights and hot highlanders, but occasionally dabbles in contemporary romance. When she reluctantly leaves her computer, she enjoys exploring old ruins and indulging an early midlife crisis. Adrenaline filled suggestions for the bucket list are always welcome!

1 Paperback copy of Not Another Soldier 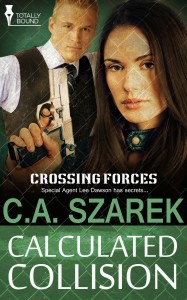 Special Agent Lee Dawson has secrets. Secrets that forced her from Dallas to New York City in disgrace two years ago.Dallas County Assistant District Attorney, Nate Crane, visits New York and witnesses the brutal murder of a friend. When Lee is assigned to the investigation, her personal and professional life collides. She can’t avoid the man she ditched six months ago.
She’s the one Nate can’t stop thinking about. The one he let get away. He’s determined to get her back, no matter what she thinks she wants. Being a witness in her case puts them close—and Nate intends to keep it that way.After Nate’s attacked at a safe house, Lee knows there’s a leak – a dirty FBI agent working with the human trafficker her unit has been hunting for years.Can Lee protect her witness and resist the heat between them or will she succumb to her desires and throw them both into danger?

C.A. is originally from Ohio, but got to Texas as soon as she could. She is married and has a bachelor's degree in Criminal Justice. She works with kids when she’s not writing. She’s always wanted to be a writer and is overjoyed to share her stories with the world.

Other Books in Crossing Forces series: