Today, I'm featuring a new (to me) author, Clara Grace Walker, who wrote Gratification (Desire Never Dies).  I'm reviewing the book, so just scroll down slowly for my thoughts on it...But read through first, there's all kinds of great stuff from Clara.  There's also a chance to win stuff at the end. 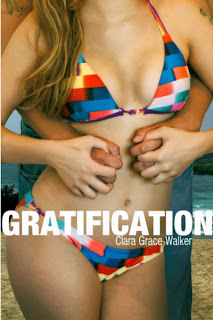 Blurb:  Sex, drugs and money. Preston Tyler's fight to save his company from a hostile takeover is not your average business deal. Worse than the lying, scheming and back-stabbing he must deal with, however, is having to go to his company's largest shareholder, Maggie McKenize, for help; the woman who jilted him at the altar. If Preston plays his cards right, maybe he can not only save his company, but win back Maggie's heart as well.

Clara’s Playlist:  This changes from time to time, but currently consists of the following:
1. Wake Me Up by Avicii
2. Brave by Sara Bareilles
3. Breathless by The Corrs
4. Linger by The Cranberries
5. What If by Five For Fighting
6. Show Me What I’m Looking For by Carolina Liar
7. Drops of Jupiter by Train
8. Cruise by Florida Georgia Line
9. Love Me Again by John Newman
10. Counting Stars by OneRepublic
11. Little Wonders by Rob Thomas
12. Sundown by Gordon Lightfoot

Tell Us About Your Book:  Gratification is about Preston Tyler’s fight to save his company from a hostile takeover.  Of course, this is not your average business deal, as it involves sex, drugs and murder, (and no small amount of back-stabbing).  In order to save his company, Preston must also go to the largest shareholder for help; who also happens to be his ex-fiancée, Maggie McKenzie.  As Preston fights to save his company, he also struggles to win back Maggie’s heart and convince her to give their love another chance.

What Role Does Music Play In Your Writing?  Music influences my writing in many ways.  It inspires me in terms of mood and theme, and also informs me about my characters.  I know, for example, that Preston’s character in Gratification would hear the song If You’re Gone by Matchbox Twenty and think of his lost love, Maggie.  I also know that Rod liked using music as a tool to keep his female conquests a little off-balance.  We see this when he takes Taralynn to the punk rock bar called The Dungeon.  In his personal life, however, as shown in Gossip, Rod prefers 80s pop music.  It’s not only what music a character likes, but also what they pretend to like, that reveals something about them.  Patrice McKenzie, for example, loves attending the opera and the symphony.  Not, however, because she has any real appreciation for the music.  With Patrice, it’s all about appearances.  In this way, Patrice exemplifies Gratification’s theme of deceiving appearances.

What do you like to read when you are not writing?  I love reading women’s fiction, suspense and fantasy/sci-fi.  I read a pretty diverse group of authors.  Everyone from Sidney Sheldon to Elmore Leonard to James Patterson, with fantasy/sci-fi classics like Tolkein, Douglas Addams and George RR Martin thrown in for good measure.  And I love Hemingway!

Which aspect of writing do you struggle with the most?  I find the first draft of a book the most difficult to write, getting out the bare bones of the story.  Editing comes much easier to me; fleshing out the details and tweaking the plot.  It always feels less daunting to me once I feel like I have something to work with.

Which character do you have the most in common with?  In Gratification, that would have to be Maggie.  I share her stubbornness, her love of children and her desire to help victims of domestic abuse.  In terms of characters from all of my works, collectively, however, the answer would have to be Nick Beck.  We are both ambitious, charge-right-in, do-what-we-want types who love grammar!

What advice would you give an aspiring author?  Write.  Re-write.  Re-write some more.  Listen objectively to criticism and be gracious in receiving it.  Read the things you truly love several times, highlighting passages that speak to you so you can analyze how the author achieved that effect.  Learn your craft; spelling, grammar, the whole nine yards.  The best editing advice I ever received was this:  When in doubt, leave it out.  Most of all, never give up.

What do you have planned for the future?  I will be releasing Gossip, book 2 of the Desire Never Dies trilogy on December 15, 2013.  Look for it as an e-book on Amazon.  Redemption, Book 3, the final installment of the trilogy, will be released in the Spring of 2014.  After that, I will be starting an, as yet unnamed, series, which will consist of 4 novels:  Exploits, Whispers, Delicious and Sanctuary.  I plan on keeping busy with my writing for as long as my fingers can still strike the keyboard! J 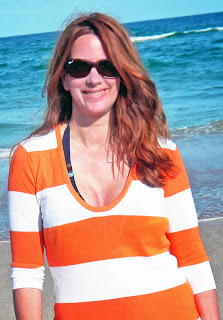 I gotta say, I really liked this book. There was so much about it that was great: tight writing style, epic struggles, well-drawn out characters (both primary and secondary), great dialogue, and gripping story.  While the romance Gratification is almost secondary to the soap opera around the main characters, the relationships between everyone was very real.  I got so mad at Maggie for being so freaking stubborn because I fell in love with Preston.  I felt for these characters who, at the beginning of the story, seemed a little unoriginal, but grew on me.  The secondary characters, who were almost all horrible people, were so well done, and deliciously evil.  I even began to pity a couple of them towards the end.  I had two problems with the book.  1.)  Maggie was soooo stubborn.  She couldn't see past her own issues, even when they were pointed out to her, and she was so quick to judge Preston, a couple of times even calling him judgemental.  2.)  The bad guys were so bad.  I know that sounds weird, but (and this is incredibly difficult to do, I think I point it out because it's an issue I have with my own writing) a great bad guy needs to have something to like about him, or the reader can't relate to his motivations.  A great example of this is Crimson Sky. Anyway, that's a common problem I find in books, and I'm pretty sure I'm constantly finding it, because I struggle with it myself.  Overall, I found this book gripping, and I can totally see James Patterson's influence in Ms. Walker's writing, as it was incredibly suspenseful, with lots of twists and turns before getting to the inevitable happy ending for Preston and Maggie.  Great job!

She just released Gossip, and I'm looking forward to reading that one, especially if it's like Gratification.

For your chance to win an autographed 10 x 12 book cover and a $10 Amazon gift card, all you have to do is comment on this post with your favorite bad guy from a book or movie.  Be sure to follow my blog to see other spotlights and posts from other great authors (as well as myself).  I will choose the winner tomorrow morning (24 hours from now) via randomizer.org.