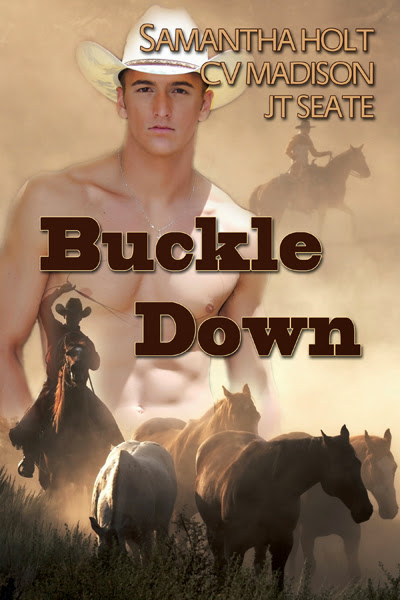 Includes:  Her Dream Cowboy by Samantha Holt, The Layover by C.V. Madison, Faith, Hope and Charity by J.T. Seate

Her Dream Cowboy by Samantha Holt

Talked into experiencing ranch life for herself by her best friend, Sophie comes all the way from England to Nevada, alone. But while her friend may have abandoned her, her guide for the week promises to stick close to her side.

A guide who just happens to be an honest to goodness, sexy cowboy.

Luke Harper is a busy man. He’s dedicated years to turning his ranch into a successful holiday business and he’s yet to find a woman who can deal with the realities of dating a cowboy. In his experience, they’re all after a dream. But Sophie proves too tempting for her own good and Luke can’t help wondering if the gorgeous woman would be willing to give him a chance.

Or is she just looking for a dream cowboy too?

Security expert and avowed city boy Reno Locke drops into The Meeting Place for a little loving to fill his off hours. Country boy Wilder Henderson swings through to blow off a little steam after winning a rodeo competition. Locke finally works up the nerve to hit on Wilder and Locke takes Wilder back to his room. He finds out this urban cowboy is just what he was looking for during The Layover.

In the old west, a young couple have plotted a future rendezvous for any chance of a life together, if only poor Johnny isn’t gunned down first by Faith’s father who is out for the cowboy’s blood.


About the authors
Samantha lives in a small village in England with her gorgeous twin girls and husband who is a trained bodyguard and ex-soldier (Yes, seriously!).  She traditionally writes historical romances involving chivalrous knights and hot highlanders, but occasionally dabbles in contemporary romance. When she reluctantly leaves her computer, she enjoys exploring old ruins and indulging an early midlife crisis. Adrenaline filled suggestions for the bucket list are always welcome! Find Samantha on Facebook at www.facebook.com/romanticfiction

When she tilted her head up to his, he found himself caught up in her pretty dark eyes. He heard her sharp intake of breath and a shudder wracked her. He hoped it was no longer fear that made her shiver.
Lips parted and he knew he had no choice. He had to kiss her.
Dipping his head, he skimmed his mouth across hers experimentally. When she didn’t pull back, he tried again, pressing harder this time. She released a tiny moan and shocked him by slipping her tongue in his mouth.
Luke’s body responded immediately and he grazed his hands down to cup her ass and rock her into his arousal. She gasped. Had he scared her? Apparently not, as she looped both hands around his neck and twined her fingers in his hair.
Damn, the woman could kiss. So much for the stiff British upper lip. She explored his mouth, tangling her tongue greedily with his. Her ass gave way under his fingertips when he molded his hands around them and squeezed. Blood rushed through him and all he thought of was stripping her bare and feasting on every inch of her.
A squawk from above broke through his lusty haze as she jolted in his arms at the sound and he prized himself away. Dammit, she was here to see the sights. To see the blasted wildlife, not kiss him. Lips flushed and soft, she gazed dreamily at him, cheeks pink. Too roughly he thrust her back and her dreamy state snapped quickly away.
“Sorry,” he muttered. “Unprofessional of me. Didn’t mean anything by it.”
Sophie scowled and tugged her askew T-shirt back into place. “What did you expect? That I’d fall head over heels for you? It was just a kiss, nothing more.”
Just a kiss? Luke righted his hat and stared at her. Just a kiss? Yeah, a kiss that boiled his blood. A kiss that made him forget all reason. A kiss that made him want to pin her to the dusty ground and take everything she could give. Like hell was it just a kiss.

Locke walked out of his pants and worked the buttons free of his shirt. It slid from his shoulders in the doorway to his bedroom. "I got neighbors, yeah, bu-- damn." He came to a dead stop and devoured the sight of the near naked man before him.
While he wouldn't say Wilder was ripped, he was defined. The lines of his abs curled all the way to the rise of his hips. As a horseman, he had broad, well muscled thighs and through the shed of clothing across the small main room, the man was still wearing his hat.
Locke grinned wickedly, tugging his tie from his neck. He dropped it to the floor and backed into the small bedroom. "Leave the hat on.”
With a tip of his Stetson Wilder crossed the abbreviated foyer. His bravado showed in his stride, a cocky strut of pending glory awaiting him just feet ahead. He lingered just past the doorway, giving a low whistle before he struck out for the bed again. He fingered a small length of rope he palmed from his jeans pocket.