#NewRelease from Anne Conley, in the Playing With Fire series, Spin the Bottle

Blurb:
Zane has his sights set on the odd little woman with her funny rules. When their first kiss doesn’t end well, he can't understand why she won't give him a second chance. Now he’s seriously determined to make her see they can be explosive together.

Lettie has always believed a kiss will determine how the relationship will go. Her disastrous lip-lock with Zane is a strong indication she's not moving forward with him. He won't take no for an answer, though, and does the sweetest things to change her mind, including opening his home to over fifty animals while she cleans up the smoke damage at the local shelter.

Sparks fly as Lettie does her level best to extinguish their attraction to one another.  At the same time, Zane is doing all he can to fan those sparks into flames.


Spin the Bottle, Playing with Fire #3, is HERE!!!  Grab your copy now at the following links... 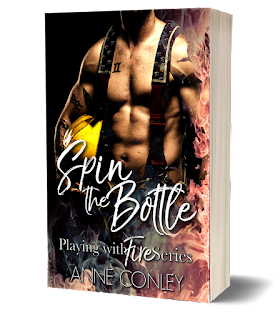 The theory had developed in high school. It was a good theory, but she’d had to test it out and actually date the guys she’d kissed to carry the experiment through. Thomas had been a careless kisser, as well as a careless lover, and had certainly been careless with her financial well-being. She wasn’t even going to think about her emotional stuff during their relationship.

Before Thomas had been Cedric. He’d been a sloppy kisser. And a sloppy man. She’d never had sex with him but could only assume he was an equally sloppy lover. 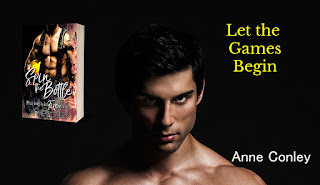 Before Cedric was Ian. Ian’s kisses had been prim and proper, his hands never straying far.
As they’d done in all things.

The list didn’t go on forever because it was exhausting, and she was Lettie and hadn’t tested it as extensively as a more outgoing woman would have. Since Thomas, she’d vowed to let the kiss do the telling, so how Zane kissed would be how he would be. And she wouldn’t do the dating thing to figure it out this time. She would save herself the trouble.

If she ended up with his damn chewing gum in her mouth, she was done. There was no way.

After Zane’s shoot was finished, he went to a meeting in some back room and was gone for most of the day. By the time they were finished, Lettie was packing up the dogs and cats to go put them back for the day.

“Sorry. You got the paperwork for Otis?” He jogged back to where she was, making it look effortless. It made her a little sick. If she’d jogged through this building, her face would be red, her hair would be flying out of her bun, and she’d have sweat stains in her pits. As it was, Zane just looked gorgeous.

“Yeah.” Lettie dug around in her backpack and came out with a clipboard and an attached pen before looking away. “Fill out the top three pages, and then the bottom two are yours to keep. I’ve got his shot record in my truck. We can get that after I get these guys taken care of.” Which was now. She gathered the remaining dogs’ leashes, having already put the cats and half the puppies in the truck.

It was awkward, walking five dogs at once, but she’d almost made it when Zane met her outside. He took three leashes from her, relieving her burden.

“Can I ask you out again? I really want to take you to dinner.” The heat from earlier was gone from his face, replaced with an earnestness. It was hard to say no. 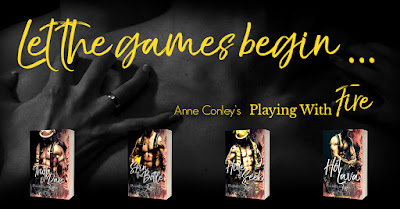 She sighed. “One thing first.” It was now or never. Raising herself on her tiptoes, she leaned forward, resting one hand with the leashes wrapped around her wrist on his shoulder. His eyes lit up and he lowered his head but stayed still, clearly wanting her to broach the distance.

Strike one. He was making her do the work. It was pretty obvious she was coming in for a kiss, so the least he could do was meet her halfway.

She gently caressed his lips with hers, his cinnamon gum overwhelming her with spicy sweetness. That sort of undid his strike of making her make this move. Hygiene was super important, and Zane seemed to take care of himself. He certainly tasted good.

Lettie went to back up to end the kiss, but Zane’s hand went to the back of her head, holding her in place.

Now she didn’t have control over the kiss anymore. So yeah. Strike one. Definitely.

His soft lips molded perfectly to hers as he moved his mouth across hers. That was nice. It might undo the first strike again. He angled her head so he could slant his mouth over hers, and his tongue pressed against her lips. 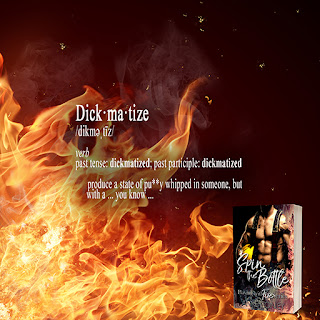 But her body didn’t seem to agree. Her breasts were doing that tingly thing again, and Lettie realized she was pressing against him. Or were the leashes wrapping around them, pressing them together?

He licked the seam of her lips, and Lettie gasped. Taking advantage, Zane swept his tongue in effortlessly. That would be another strike, except Lettie couldn’t think anymore. His cinnamon flavor was spicy and sweet and completely overwhelming. She’d lost count of which strikes had been overridden and which ones stuck, and what were the strikes for anyway?

His tongue was doing unspeakable things to her mouth, and Lettie realized she was clutching his hair as if it were a lifeline. They were tangled in leashes as the dogs danced around them, but neither of them seemed to care. His mouth closed around her bottom lip and suckled, nipping it softly with his sharp teeth.

This was a nice kiss. Better than nice. Her insides were completely exploding, and she was tempted to wrap her legs around him and grind until she got off. She was surprised. Nobody had ever made her lose it like this.

She pressed against him, a gurgle of approval sounding in the back of her throat at the impressive length against her hip. Lettie couldn’t help herself. She squirmed, his answering groan making her skin erupt in gooseflesh.

And then, as if they were reenacting the scene from 101 Dalmatians, the dogs tightened the leashes at the same time someone yelled, “This isn’t the goddamn Love Boat, Romeo!”

Zane’s head snapped back, and they both lost their balance, crashing to the ground in a tangle of arms, legs, dogs, and leashes. Their heads banged together, and Zane crushed Lettie underneath his massive body.

That was three strikes in one move.
~*~*~*
Like that?  Follow me everywhere (or wherever you'd like) for more! And if you haven't gotten the rest of the series, links are here:

Anne has written her entire life and has the boxes of angst-filled journals and poetry to prove it. She’s been writing for public consumption for the past several years. She lives in rural East Texas with her husband and children in her own private oasis, where she prides herself in her complete lack of social skills, choosing instead to live with the people inside her head.

Currently, she has five romance series.  Playing with Fire explores the trials and tribulations of a small team of fire fighters in the fictional mountain town of Pamona Gulch. In Pierce Securities, she
gives us Ryan, Evan, Miriam, Zack, Quinten, Jordan, Hollerman, and Simon. Her favorite series, Book B!tches, is all about a group of women in Mystic, Texas who get into all sorts of shenanigans. In Stories of Serendipity, she explores real people living real lives in small town Texas in a contemporary romance setting. In The Four Winds, she chronicles God’s four closest archangels, Uriel, Gabriel, Raphael, and Michael, falling in love and becoming human.