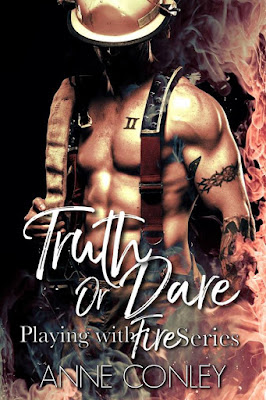 When a child’s game goes delightfully wrong, Jude finds himself rethinking his current status quo and begins looking to Annette to make sense of his own life.

Annette is trying not to get distracted by the sexy firefighter, but when her artistic retreat begins in disaster, Jude’s playing the hero she can’t ignore. Suddenly, her artwork is completely changed with Jude’s exquisite lines transforming her landscapes.

Up until now, their life was like a notebook full of doodles, but it’s turning into a full-fledged art showing, and neither of them know how to deal with the embers of desire when they ignite into flames. 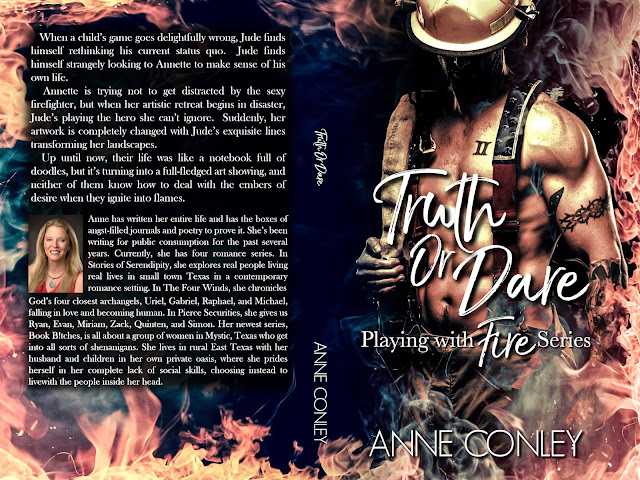 Jude let out a hiss of air, probably because the paint was cold, but it made his nipples stand out, a stark relief against the flat disks on his chest. She traced the ridges of his abdomen with strokes of color that stood out against his tanned skin.

The bristles of the brush loved Jude’s skin, flattening and molding to it, leaving color in their wake. It was glorious, the way her hand was working the brush.

His jeans hung low, and Annette held her breath as she outlined the line that went down the outside of the abdominal ridges, leading into the miraculous “V” that ended with the jutting
bulge in his jeans. Jude was holding his breath too.

Moving back up his body, she painted his collarbone, his neck, his Adam’s apple, then stood back and looked at him, trying to imprint the picture in her mind. Grabbing her sketchbook to ground herself, Annette quickly drew the lines, transposing them from Jude to paper so she could look at them later.

His eyes were dark and intense, like a caged beast was inside him desperate to be let loose. Not finished with her work for the day, she tried to ignore that thought.

Vague impressions of Drake and his intentions for her show made her focus enough on her work to make sure she utilized the light while she could.

She made a quick sketch of Jude’s torso lines and looked at him again. He hadn’t moved and was still looking at her intently. A shudder of need slammed into her, but she still required something more.

Annette looked at him, trying to be dispassionate as she thought about what it was she needed.

She needed him to move a little bit so she could get the lines in motion.

“Can you hold onto that beam above you?” His golden eyes looked up to the beam in question, a good two feet above his head.

Her breath hitched as he jumped straight up in the air and grasped the beam, his muscles popping with the exertion.

Those were lines a girl could dream about.

“Perfect,” she breathed as she reached for a chair to stand on and continue painting him.

The muscle around his armpit was bulging out roundly, so she started there. God, his arms were phenomenal. She loaded up her brush and went to work, tracing the routes of the veins on his forearms as his hands gripped the beam. His biceps were bigger here, more defined from this position, so she re-marked them in a darker shade of the flame color she’d mixed up.

His jeans sunk lower on his hips, so she was able to trace this “V” a little further down, gulping at the top of the nest of curls peeking from his jeans. The curve of his ass showed as she went around to the back of him.

“How long can you hang there?” She really wanted to get his back. It was amazing, the muscles a brilliant topography of the human body.

“As long as you need me to, sweetheart.” He wasn’t breathless at all, so she took his word for it.

After a quick sketch of the lines on his front, she went around to the back and started painting it.

Annette hadn’t done many portraits and hadn’t had much of an interest in sketching the human body. It was mostly because she went to college in east Texas, and the nude model they’d had for the one lesson had been a woman.

She may have to rethink the human anatomy. 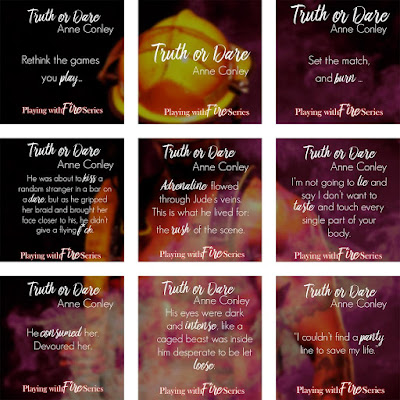 And if you haven't read any of my stuff yet, never fear!!  I have freebies!  Check them out, and you can try before you buy!

iTunes
Posted by Anne Conley at 6:05 AM