I've been so busy lately, I haven't had time to blog much.  I decided to let you guys in on what all's been keeping me so busy, so you can understand.

The Pierce Securities books have been a HUGE hit, and are selling like crazy, which has been amazing.  I've been trying to keep up with fan's demands for more, and am currently working on the rough draft to Zack's story, Seek.  I quit smoking in March, and had a rough period where I couldn't write anything from an outline.  A new character came alive in my head, so I wrote him instead, and VOILA!  Jordan happened, so Pierce Securities is now a seven book series, and I'm okay with that.  Here's the reading order, if you're interested.

AND in the midst of all that, I got a ridiculous idea for a new series, which will also be started early 2016.  I have the first rough draft written, and it's LOOOOOOONG, but it's going to be good, I hope.  It's a genre-bender: a small-town contemporary romance, with a suspense plot twisting around in there, as well as a kicking historical component.  I don't have a blurb yet, but it's coming along faster than I anticipated, so all that should be coming soon.

I finished the Four Winds Series, so Falling for Cyn is live on Amazon now.  I'm having the entire series re-formatted for your reading pleasure, so look for a new push for the entire series soon.  In the meantime, I have this cool graphic to share...ain't it pretty? 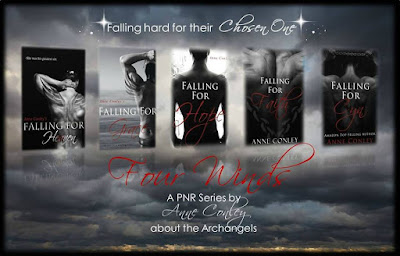 I'm currently in THREE anthologies, so several of my books are available for download at .99 if you're interested in reading them along with discovering some new authors.

For contemporary romance fans, The Fixer Upper is in Affairs of the Heart

For paranormal romance fans, Falling for Heaven is in By Moonlight

And for romantic suspense lovers, Craze is in What to Read After Fifty Shades of Gray, Sexy Suspense Boxed Set


So with four rough drafts working, a new series swirling around, and all the other hooplah that goes with things, I gotta say, I'm busy, but busy is great.  NO COMPLAINTS!

And in the midst of all this, I have a 79-year-old mother, two kids, and a hub-meister who all demand the utmost care, which I endeavor to half-heartedly give.  So life happens as well.

My blog has suffered, but I'm trying to do better.  I'll be updating my homepage soon, and posting a new first chapter.  So tell me.  Do you want the first chapter of the new series?  Or Zack's story?  Tell me in the comments, and one random commenter will win an e-book of Craze (if you haven't read it, if you have, you can choose another of my titles)  Let me hear from you!